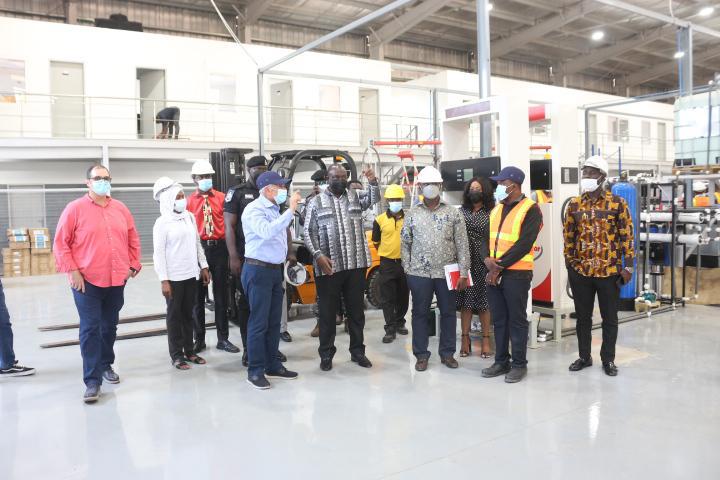 Mr Alan Kyerematen (3rd from left), Trade and Industry Minister, being briefed by Mr Mohammed Byrouthy (2nd from left), during the facility visit

A media release issued in Accra said the Nissan vehicle assembly plant is being built to assemble new Nissan Navara in Ghana and also mark a major step towards the development of Ghana’s automobile industry as the new automotive hub for the continent.

Mr Kyerematen was given a tour of the various sections at the plant including the assembly line, tester line and the unique water test facility.

The release said he expressed satisfaction about the works done so far, described it as impressive and truly ultra-modern and assured of the government’s support when production starts.

Speaking to the media after the tour, the Assistant Managing Director at Japan Motors, Mr Mohammed Byrouthy, expressed joy at the visit by the minister.

“We are on track to give the auto industry the most modern vehicle assembly plant in Ghana and we are inviting all to join us for the official launch hopefully in March this year,” he said.

For his part, the Executive Director, Mr Nouhad Kalmoni, said the visit by the minister was a confidence booster to the company to do more in Ghana.

“He has realised we are not taking shortcuts having witnessed the different stages of the assembly process. Whatever you get here is not going to be different from what is coming from Europe, Japan or South Africa.

“The vehicles are the same, quality is the same and assurances from the manufacturer in terms of warranty and after-sales from us are not going to change. We hope to make Ghana proud,” he said.

Japan Motors, Nissan’s long-time distributor in Ghana, has invested US$8-million into building the assembly plant. Nissan chose Japan Motors as its local assembly partner, following the signing of a memorandum of understanding between the Japanese car maker and the Ghanaian government in 2018, when Nissan became the first Global OEM to commit to support the creation of a sustainable local automotive industry.